CNET: How to Talk to a Loved One Who Has Dementia: Never Say 'No'

Your mom, your dad, your grandma with memory loss … they’re still there. A dementia expert offers practical tips for communicating effectively.

I’ll never forget the last real conversation I had with my late mother-in-law, Grace. She’d had Alzheimer’s disease for a number of years, and making a call on her smartphone was getting tough for her. So I was surprised to see her name pop up on my screen, calling me on a random Thursday night in the fall of 2021.

“Are you watching 60 Minutes?” she asked.

I paused. I hadn’t watched the news-magazine show in decades, but I knew it aired on Sunday nights, not Thursdays. I also knew how confused Alzheimer’s had made my mother-in-law.

Before her illness, she’d always kept up with the news and had strong opinions on politics — even campaigning for John F. Kennedy when he ran for president in the 1960s. She kept her mind active well into her 80s by doing the daily crossword puzzle in her favorite newspaper, The Los Angeles Times, and she loved to discuss new books with me.

But Alzheimer’s had robbed her of her focus, and often her words. I knew how hard that was for her, how she became frustrated to the point of tears when she couldn’t make herself understood. If she thought she was watching 60 Minutes on a night it wasn’t on, I was not about to disagree with her.

It was the right answer. In a happy, satisfied voice, she said, “They’re a nice couple, aren’t they?”

Couple? Who was the couple? Mike Wallace and Morley Safer? Weren’t they dead? It didn’t matter.

“OK, I’ll let you go now,” she said, and the call was over. Grace died about a month later, at age 85. She’d moved from her two-bedroom California condominium into a beautiful assisted-living facility just eight months earlier, barely getting a chance to enjoy its hair salon, field trips and other amenities.

Her health deteriorated quickly, and she soon needed 24-hour care. We moved her from the hospital to a board-and-care home run by a compassionate Russian doctor, and she lived there for just one week before passing away.

Every day, I’m thankful I agreed with her during that phone call. In her world, she was watching a “nice couple” on 60 Minutes on a Thursday night, and I knew enough about her dementia to try to enter the world she inhabited.

‘I’ve got your back’
Diana Waugh knows just how hard it can be to speak to someone with cognitive loss, whether it’s Alzheimer’s disease, Lewy body dementia or another condition. Waugh is a veteran nurse and a certified dementia practitioner. Her business, Waugh Consulting, focuses on giving caregivers and family members the tools to communicate with loved ones suffering from dementia.

But Waugh didn’t always know how to do this. Her own mother, Iona Kiser, suffered from dementia and died in 2008 at 95.

“I did everything wrong,” Waugh says. “I was less than successful with her.”

Since then, Waugh has published a short book, I Was Thinking: Unlocking the Door to Successful Conversations with Loved Ones With Cognitive Loss. She’s spoken to countless caregivers, and produced numerous videos explaining her approach.

Waugh says she can sum up her philosophy about conversations with them in one phrase: “I’ve got your back.” She also holds strong feelings about the word “no” — saying caregivers shouldn’t use it. And she encourages caregivers to divert potentially troubling conversations to focus on old memories their loved one can easily discuss, as opposed to trying to quiz them on new information their brains just can’t access.

Her work won’t give her that time with her mom back, but she’s helped numerous other people along the way.

Sheila Qualls’ 86-year-old mother has dementia, and Qualls has been working with Waugh on how to better communicate with her mom.

“I miss my mom, but Diana taught me how to ‘access’ her,” Qualls says. “Her techniques have made a huge difference in how we respond to my mother and have changed our lives.”

“So if you ask [a person with memory loss] to go to lunch with you tomorrow, they put that in the short-term drawer [and it’s forgotten],” Waugh says. “You show up, they’re still in pajamas. A smart person says, ‘Let’s go anyway.'”

The person with dementia can’t tell you how they feel today, Waugh explains, since that involves short-term memory. But they can tell you “how it felt when they hurt their knee at age 40.”

Always have three stories at the ready, Waugh tells clients, and then use them to keep the impacted loved one in the conversation. Bring up those old memories and encourage them to talk about those things.

“My mom may not remember who I am, but when I begin talking about her childhood or my childhood experiences, she can engage right away,” she says.

It can also be helpful to show photos to your loved one, but “make sure they’re old photos,” Waugh warns. A new great-great-granddaughter may be cute, but it’s unlikely a person with cognitive loss will have any idea who that baby is.

Divert and redirect
Waugh tells a story of a woman who moved her elderly father from Nashville to Houston and worried he’d want to return to his familiar barn, which was now several states away.

In such a scenario, instead of telling him no, that his beloved barn was gone, Waugh says caregivers should calmly use the barn as a jumping-off place to get the man talking.

“Say, ‘I was thinking about that one racehorse you had,” Waugh says. “And once they start [talking], let them go.”

“Diana also taught me how to answer questions when my mother wonders where my father is,” Qualls said. “Divert and redirect. Works like a charm. Diana taught me to enter my mom’s world instead of trying to bring her into my reality.”

Taking away the car keys
Many people first tune in to cognitive loss when they realize their loved one can no longer drive safely. But how to get them to give up the keys? You might be tempted to lie and say their car is broken.

That doesn’t work, Waugh says. If the loved one is early on in their cognitive loss, “they’ll call AAA to get that ‘broken’ car fixed.”

Instead, she suggests telling them about a scary incident you recently experienced on the roads, or claim you recently got lost while driving. These kinds of stories might hit home with someone who’s almost certainly beginning to notice problems. You might also be able to convince them a family member needs to use their car for a while, just to have an excuse for why it’s suddenly inaccessible.

Here’s what to never say
Waugh encourages caregivers to avoid one word: no.

“‘No’ doesn’t do a darn bit of good,” she says, explaining that the word only angers the loved one. If you can divert the conversation instead, the person will likely forget the diversion in five minutes and happily move on. But if you make them mad by telling them “no,” they’ll be mad for the rest of the day, she says.

Waugh understands why frustrated caregivers might be tempted to say no. Their loved one might be insisting they need to get to work when they haven’t held a job in years.

By saying “no,” the caregiver is hoping, she says, to bring the person back to reality by denying their “erroneous thinking.” But the person they love is living in their own reality, and the caregiver will need to keep saying “no” over and over again, increasing stress on the relationship.

“It’s like waving a red flag in front of a bull,” Waugh says. “The person likely does not remember whatever it is, and asking them to do so puts them under pressure they no longer know how to handle.”

What to say instead
Instead, Waugh encourages people to use a phrase from the title of her book, “I was thinking…” as a starter to encourage memories. If a loved one tells you they have to get to work, although they haven’t had a job in years, calmly say, “I was thinking…” and then launch into some detail about a job they once had.

If it suddenly occurs to them they’ve lost a loved one — even if that happened years ago, you might start off with “I was thinking…” and then relate a happy memory about that loved one’s pie-baking skills.

Successfully communicating with loved ones who have dementia can be wrenchingly hard. Waugh knows that only too well.

“We need to stop looking at [our loved ones] as we always have,” Waugh writes in her book. “When we change our expectations, we can find them as they are. We can have meaningful conversations. Our relationship, though different, will be so much more fulfilling. It will provide us with happy memories of the latter part of their lives.”

Read article here: How to Talk to a Loved One Who Has Dementia: Never Say ‘No’ – CNET

Thank you for being an active subscriber of our newsletter!  Contact us directly with your questions and comments. 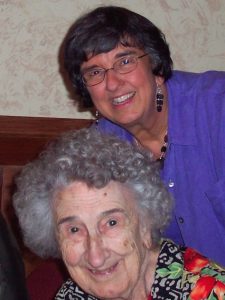